Summary My attempt to install a contemporary GNU/Linux system (2.6 kernel) on an old (ca. 1998) was a lot more work than I expected. The basic install went easily enough, but the devil was in the fine-tuning details. 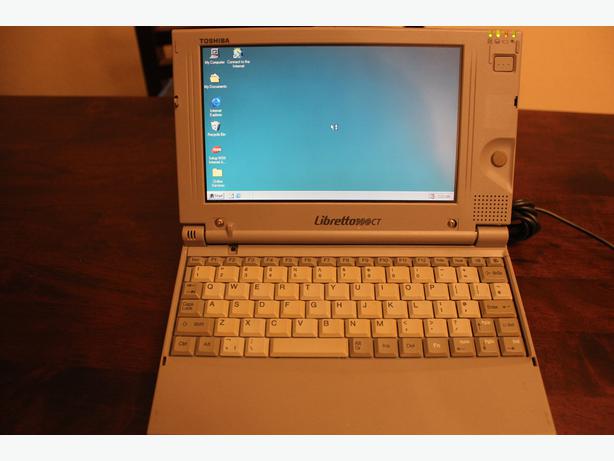 I just purchased a laptop that I've wanted for almost 7 years now, a Toshiba Libretto! I browsed the forums a bit and found someone who submitted some drivers and apps for a 50CT which I will try out. 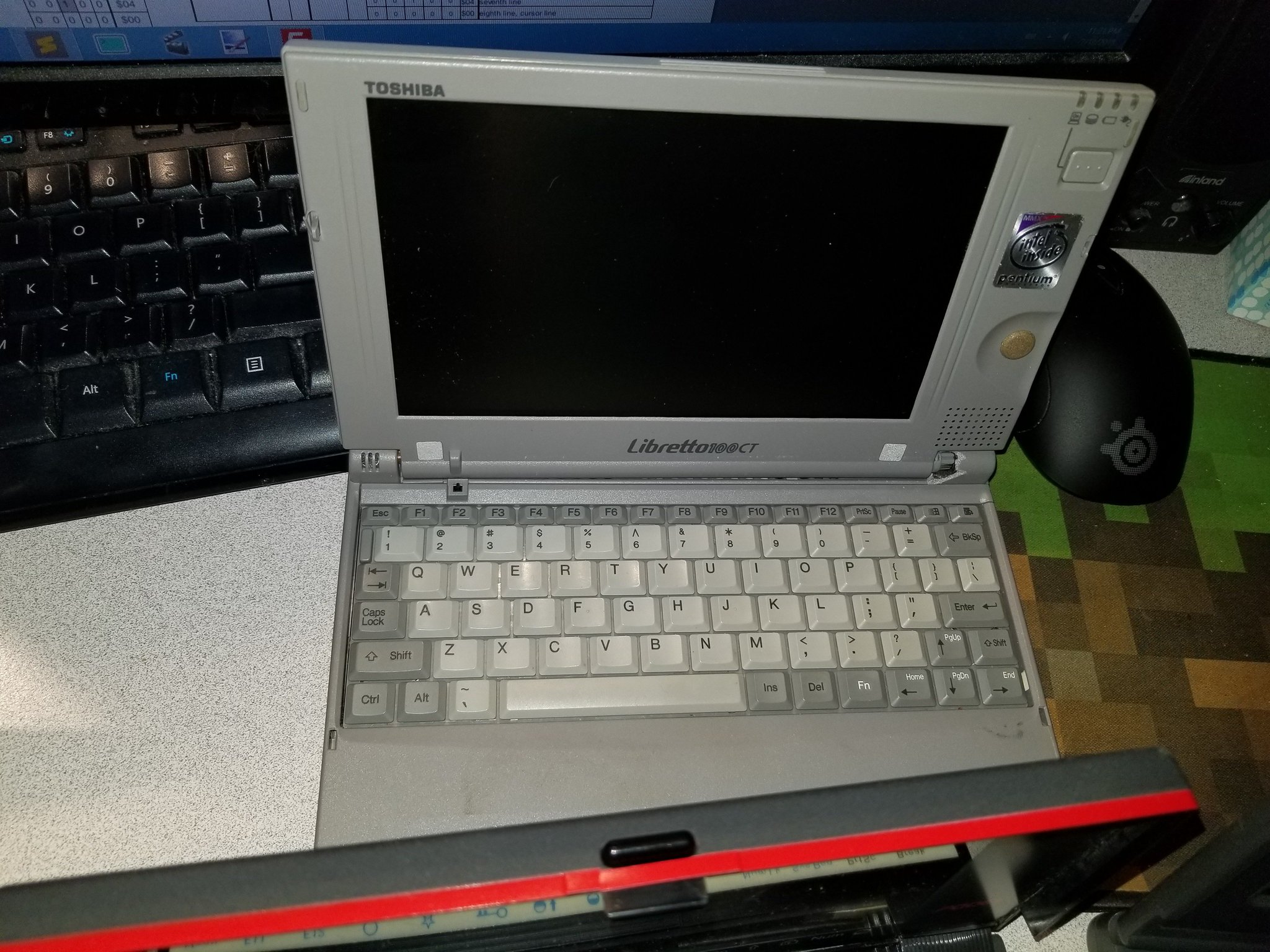 Most of the documents I was able to find regarding Linux on the Libretto 100ct/110ct were nearly as old as the laptop itself (most dealt with 2.2 and 2.4 kernels). Sadly, I was never able to achieve a fully-functional system using a 2.6 kernel. The basic system worked fine, but there were unresolvable sound and ACPI issues.

Sound simply never worked under 2.6 (ALSA drivers refused to even find a sound card, while the OSS drivers did, but wouldn't work). BIOS Update Toshiba offers BIOS updates on their Web site. BIOS images come in two flavors: -based, and -based. Which BIOS version you use is dependent on which kernel version you intend to use.

I'm using the older, APM-enabled BIOS simply because, for the most part, it works much better when the Libretto serves as a single-user laptop. The following lists detail the differences that I saw between the two flavors of BIOS:. APM-enabled. Suspend-to-disk (AKA 'hibernate') is handled by the BIOS, and works great.

Sound works fine (using the OSS drivers). Does not appear to assign an IRQ for the CardBus bridges. ACPI-enabled.

No suspend-to-disk support (supposed to be handled by the OS). Requires a custom kernel build to that it ships with. I'm not entirely sure what the fix accomplished, though.

Not much seemed to improve with the fix. Assigns a real IRQ for the CardBus bridges. Theoretically, this should improve performance and reduce power consumption. I never made any attempts to actually test that assumption, though. LCD Backlight Backlight intensity can be controlled using the command-line utility. The program relies on the toshiba kernel module. This module is included in the Debian kernel image packages (and should also be in those of other distributions).

Usage of toshlcd is straightforward, but you may have to compile the program from source. Amazingly, it appears the older Librettos only have four brightness levels for their LCD backlights. I've found the range of adjustment on the Libretto's backlight to be less than impressive. The brightest setting is dazzling, while the dimmest is still pretty intense.

It can get irritating if you're working in an environment with subdued lighting. ACPI Caveats Note that toshlcd relies on BIOS calls present only in the APM-enabled BIOS.

Consequently, if you're going to run with the ACPI-enabled BIOS (and a 2.6 kernel), the only way to vary the backlight intensity is via the /proc/acpi/toshiba/lcd entry provided by the toshibaacpi kernel module: root: # echo 'brightness: 7' /proc/acpi/toshiba/lcd Even though the toshibaacpi driver accepts any number from zero to seven, there are still only four levels of backlight intensity available. Just bear that in mind when you're setting the backlight intensity. Zero and one are the dimmest, two and three are the second dimmest, etc., with six and seven being the brightest. I have yet to figure out a way to disable the backlight entirely. Recommended Reading.

The Toshiba Linux Utilities. Originally published at on 01 February 2005. Last update on 22 April 2014. The information contained in this document is provided 'as is', without warranty of any kind, express or implied, including but not limited to the warranties of merchantability, fitness for a particular purpose and noninfringement. In no event shall the authors or copyright holders be liable for any claim, damages or other liability, whether in an action of contract, tort or otherwise, arising from, out of or in connection with the document or the use or other dealings in the document. Copyright © 2005 Paul Mullen. This work is licensed under a.

Read and understand the license prior to copying any of the content on this page. Questions or comments? Send e-mail to feedback at nellump dot net.

Posted by andrzejs on April 14 2005,12:04 Yesterday I installed DSL on Toshiba Libretto 100CT. 166Mhz Pentium MMX, 64MB RAM, no floppy, no CD. Booting from 80MB flashdisk, nice, (damn)small and quiet. Now I am trying to find out how to reconfigure X server (Xbfdev works fine starting with 1024x768, Xvsvga does not). Libretto's screen is non-vesa 800x480. How do I change default screen resolution for the Xbfdev? The sound wouldn't work either.

Has anybody any experience of such hardware? I can't boot the libretto from Live-CD so I have to configure and install the booting flashdisk on anaother laptop, with different hardware which doesn't exactly make the whole procedure easier.

Grateful for any suggestion. Posted by dougz on July 06 2006,11:27 Like user libretto, I'm a big fan of using search engines. Using google with search arguments 'libretto linux sound' yields an enormous amount of helpful info. Quote I can't hear you.

Being someone that wants my computer to make interesting beeps at me I wanted the sound to work on the Libretto. I haven't had much luck using the 'standard' sound drivers in linux but I did find a 'commercial' version of the drivers from 4Front Technologies.

Folks at 4Front actually did much of the work on the orginal sound drivers and in fact there is a 'freeware' version of the software with less support for different cards. Unfortunatly the freeware doesn't support the Libretto, or at least I couldn't get it to work. I didn't work too hard and just gave the folks at 4front $20 bucks and got my sound working.

I ended up installing the 'Generic Yamaha OPL3-SAx (YMF715/YMF719) non-PnP' driver that came with OSS. I did have to modify the 'devices.cfg' in the oss directory to match the IRQ and DMA settings for the Libretto. The following is my 'devices.cfg' file. /SECUREAUDIO OFF /IRQEXCLUDE 3 4 /DMAEXCLUDE 2 -opl3sax #Generic Yamaha OPL3-SAx (YMF715/YMF719) non-PnP OPL3SAX ON P530 I5 D0 d1 OPL3SAMPU ON P330 I9 OPL3 ON P388 On FreeBSD I found that the line above that describes the DMA channels would not work as shown.

It would lock the computer in a horrible death. Everything was groove once I changed the line to swap the main and secondary DMA channels to: OPL3SAX ON P530 I5 D1 d0 One other note about the sound hardware on the Libretto. Everywhere else in the world has standardized on a 3.5mm (1/8') stereo jack for smaller than 1/4' headphone connections. For some unknown reason Toshiba figured it needed to shave 1/32 of an inch more off so they installed 2.5mm (3/32') jacks in this machine.

Don't bother trying to find stereo 2.5mm to 3.5mm or 1/4' adapters at Radio Shack. You need to build them. You can find the parts at Mouser. Pick up a nice metal shielded plug and a jack and wire up your own adapter. How did we ever live without the Internet and search engines? Posted by dougz on July 06 2006,13:45 To paraphrase the old X-Files TV show: the answers are out there.

You will have to dig a bit. I tried another google search with the arguments 'linux driver OPL3-SAx' That resulted in, among other things: where I could specify the OPL3-SAx soundcard and Linux 2.4 (X86) os version Think of it this way - you're not likely to find anyone here who can give you a step-by-step procedure for installing sound on DSL on an 8-year old lappy. However, if you have done your resarch, gotten drivers, and are struggling with config, you'll get better help. This article on Puppy Linux install on Libretto also discusses sound config.

The answers really are out there. Posted by andrewb on July 06 2006,23:52 I have a L100 running great with DSL, both sound & graphics work fine. At this precise time I don't have my libretto to hand so can't give details of the sound setup - it isn't as straightforward as the graphics. I'll post it here as soon as I have the time (hopefully in the next couple of days).

You definitely DO NOT need to rush out & buy any drivers / software. The graphics question is easily solved. See the WIKI (I added the bit at the bottom of this page - hence the reference to the L100!. To let you skip straight to step 6 of the instructions - for a L100 you need to use the cheat-code 'dsl vga=808' at the boot prompt. The only other 'vital' piece of info you may want to know is that to move a window when the title bar is off the screen; position the mouse anywhere in the window then press the ALT key then left click & drag the cursor to move the window. The L100 is great with DSL. I can listen to MP3's & browse using firefox with no interruption to the music - try that under Windows!!

The battery life also seems vastly improved under DSL, I have had over 2 hours out of a battery that barely gives 45 min under W98 (even with the NOP patch for W98), also the PCMCIA cards run cooler (this may be due to the whole machine running more efficiently). Defininitely recommend DSL for the L100.

Posted by andrewb on July 08 2006,11:29 OK, to get the sound working put the following into /opt/bootlocal.sh: modprobe ad1848 isapnp=0 modprobe opl3 io=0x388 modprobe opl3sa2 io=0x370 mssio=0x530 mpuio=0x330 irq=5 dma=1 dma2=0 ymode=2 isapnp=0 multiple=0 There may be a problem with accessing all of the volume controls if you are using an older version of DSL (about 2.2 or 2.3). John altered DMIX recently to cope with systems such as the L100 which use 2 separate mixer devices. In DMIX you should see a total of 13 channels which you can control. If you don't you won't be able to contol the master volume, bass, treble, momo mic (the built in one), or digital input (not sure what this is, but it's listed as a channel if you do 'umix -q' in a terminal window). I'm still running DSL2.4 so I can't comment on any problems with DSL beyond that release - just laziness that I haven't upgraded. If you have any problems with the graphics or sound settings I've suggested let me know & I'll double check my system.

Just noticed you are running DSL2.1. If you don't want to upgrade I have a modified version of DMIX which will allow access to all the L100 sound channels. I've also sorted things so sound settings are reloaded after a reboot. John found a problem with my version of DMIX if too many volume adjustments were made in that it crashed with a segmentation fault. No obvoius reason why it should.

I have repeated the fault, but only under severe use of the volume control. Under normal use it seems to be OK. Even when it does crash it restarts OK from the button in the dock. Having checked my setup again you don't need the first line (modprobe ad1848 isapnp=0).

I think I'd put that in while testing things & hadn't checked whether it was really necessary, it gets loaded with the opl3 module anyway. Also DSL 2.4 has the version of DMIX which John updated to cope with systems such as the L100 with 2 mixer devices in use. If you update to at least 2.4 you should have no problems. Posted by cconly on July 11 2006,18:11 Thanks VERY MUCH for the suggestion of vga=808. I had been running with fb800x600, so the bottom of the display was unviewable. This fixes it. Here's a suggestion in exchange: I modified.fluxbox/keys to incude Mod1 F5:MaximizeWindow Mod1 F6:Close Mod1 F7:MaximizeVertical Mod1 F8:MaximizeHorizontal These commands fit the active window to the 800x480 screen so you don't have to move it around.

Fluxbox docs include a number of commands to let you resize windows by numeric parameters, but I couldn't get those to work. I agree: DSL is a great fit for the Libretto. My p166 and 64mb ram are faster than Suse 10.1 on my 'modern' laptop. (But even with DSL the keyboard on the Libretto is still tiny.) cc.