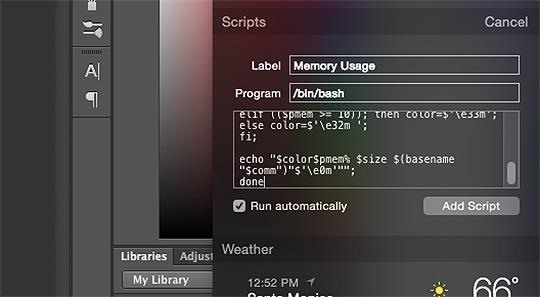 I have a Python script that learns a Deep Learning model. It takes so much time to execute (usually more than 6 hours). Now, the problem is it is MacBook Pro and I frequently go out with it, and sometimes cafes lack outlets. In such cases the Mac is going to run out just in 90 minutes even from 100% battery, as the Python program uses all the resources available. I would rather like to stop or at least restrict the program while I'm on cafes without charging the laptop, and later make it start learning again. Is this possible in macOS?

I use High Sierra.

I have been building up a number of commands that I can use in GeekTool.One that I wanted but couldn't find in other lists was the current battery capacity. Useful Perl script half-inched from a Slashdot discussion. It tells you various bits of battery information, most usefully the original max capacity and the current capacity, giving an indication of how far your. Beta6 kernel panic on start.